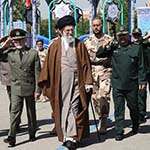 Any citizen or candidate who attempts to disrupt the upcoming elections will receive a “hard slap in the face,” warned Khamenei in a recent speech reminiscent of one he gave in June 2009 amidst the widespread, peaceful protests against that year’s vote count. 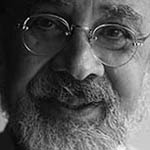 Presidential candidate Ebrahim Raisi served on a committee in 1988 that sent thousands of political prisoners to their deaths. Dr. Ervand Abrahamian, an expert on Iran, discussed the tragic history with CHRI. 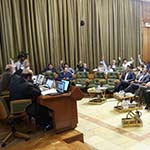 A number of prominent reformist politicians, including the only religious minority who was approved to run, have been disqualified from running in Tehran’s City Council election despite being previously approved by the election monitoring committee. 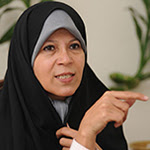 Outspoken political activist and daughter of the late former President Rafsanjani was prevented from speaking at the opening of Rouhani’s campaign office in Arak, south of Tehran, on April 30.

Mehrangiz Kar: My Husband Was Forced Tortured by Ghalibaf’s Police

“Ghalibaf was insistent on torturing, imprisoning and ruining the careers of journalists as well as artists and intellectuals working in theater and the film industry on the basis of my husband’s forced confessions,” human rights advocate Mehrangiz Kar told CHRI.​ 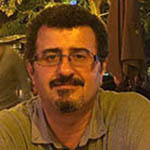 “He was the commander of the unit that detained us,” said reformist journalist Shahram Rafizadeh in an interview with CHRI. “They had a secret location in Javanan Sq. (in Tehran) and everything that went on there was under his supervision.” 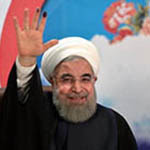 “You don’t know them, but I do,” said Rouhani at a May 8 campaign speech. “One day they met and decided to put up walls and fences along Tehran’s sidewalks to separate male and female pedestrians, just like when they segregated the staff in their offices.” 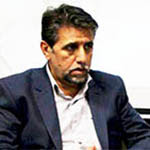 The intention is clear,” Sadegh Javadi-Hessar, who works as a reformist journalist in the city of Mashhad, told CHRI in an interview. “Mr. Rouhani’s opponents don’t want his campaign to have the necessary cohesion to promote his message.​”

Seven Things You Should Know About the Elections

From banning women and religious minorities from competing, to providing no opportunities for candidate’s to be freely questioned, Iran’s elections are far from free and fair. Here are seven reasons why.

Supreme Leader Ali Khamenei forbade protests against the election results, warning people to “avoid falling into traps set by the enemies” or get “a hard slap in the face,” in a speech on May 10. In 2009, peaceful protests in Iran against the disputed result of that year’s presidential election were violently repressed. Former presidential candidates Mehdi Karroubi and Mir Hossein Mousavi, as well as Zahra Rahnavard, have been detained under extrajudicial house arrest since February 2011 for disputing the 2009 vote count.

CHRI has learned that the Islamic Revolutionary Guard Corps (IRGC) has beenpressuring prominent reformist supporters of President Rouhani to cease their campaigning efforts. Rouhani campaign staff in Tehran have meanwhile been blocked by police and plainclothes agents from leaving their offices to do street campaigning. Prominent Rouhani supporters, including MP Faezeh Hashemi, have also been barred from giving speeches at campaign events.

At a campaign rally in the city of Hamadan on May 8, Rouhani questioned the tax-exempt status of the extremely wealthy, tax-exempt, shrine-based institution Astan Quds Razavi, headed by presidential opponent Ebrahim Raisi. Raisi was appointed as its custodian in 2016 by Supreme Leader Ali Khamenei. Astan Quds Razavi is not only exempt from paying taxes, it also doesn’t disclose its income.

Reformist former student activist Abdollah Momeni was disqualified from the Tehran City Council election on May 10, four days after tweeting that he was being pressured to withdraw from the race voluntarily. “I don’t do deals behind the scenes and my stepping aside is out of the question,” said the prominent reformist politician. “Parliament’s monitoring committee must uphold the law and defend people’s rights.” Reformist former political prisoner Emad Bahavar was also disqualified from the Tehran City Council Election despite being previously approved to run.

A biography of presidential candidate Mohammad Bagher Ghalibaf on a state-funded website—boasting about his role in “the arrests and interrogations of dozens of intellectuals, journalists, editors of news sites and bloggers such as Aydin Aghdashlou, Houshang Golmakani, Nooshabeh Amiri, Houshang Asadi, Masoumeh Seyhoun, Bahram Beizai, Younes Shokrkhah, Farhad Behbahani, Kaveh Golestan, Nasser Zarafshan and Behrouz Gharibpour by the police in 2001″—has been revised to remove all traces of the incriminating information. The biography was taken down on May 8, 2017, but an archive of the page can be found here for now. Ghalibaf oversaw the persecution of journalists and intellectuals as commander of police forces from 2000-05.

After conservatives stepped up their attack campaigns against the incumbent president, Rouhani criticized his election rivals’ positions in the country’s second televised debate on May 5, 2017. All presidential debates are hosted by state-run TV with state officials writing the questions.

Key quotes: “We want social and political freedom. We want freedom of speech and thought.”

“You talk a lot about (creating) employment but do you also include employment for Sunnis?”

State TV has edited out images of opposition leaders–including reformist former President Mohammad Khatami and Green Movement leader Mir Hossein Mousavi, who has been under extrajudicial house arrest since February 2011–from mini-docs by the Rouhani presidential campaign. In response, the Rouhani campaign independently published the videos. Rouhani also posted one of the censored photos on his Instagram page on May 9, with the caption: “We are against putting a wall around Iran…”

After being disqualifed from running for a third presidential term by the Guardian Council, former President Mahmoud Ahmadinejad (2005-13) announced on hisInstagram page that he doesn’t support any of the May 2017 presidential candidates. “There has been pressure on my staff to support certain candidates. I am a small, humble servant of the people of Iran, but I say this emphatically: “I have not and will not support any of the existing candidates.” During the 2009 presidential election Ahmadinejad oversaw the extrajudicial house arrests of two of his opponents, Mehdi Karroubi and Mir Hossein Mousavi, who have been detained under extrajudicial house arrest since February 2011 for peacefully disputing the vote count.

Mohammad Bagher Ghalibaf – The conservative former mayor of Tehran played a direct role in repressing and carrying out violence against student protesters in July 1999, July 2003, and in the 2009 post-election protests. This is his second time running for the presidency.

Mostafa Hashemitaba  – The reformist politician served as Iran’s vice president under President Rafsanjani and the head of the National Olympic Committee of Iran under President Mohammad Khatami. He was also a candidate in the Iran’s 2001 presidential election.