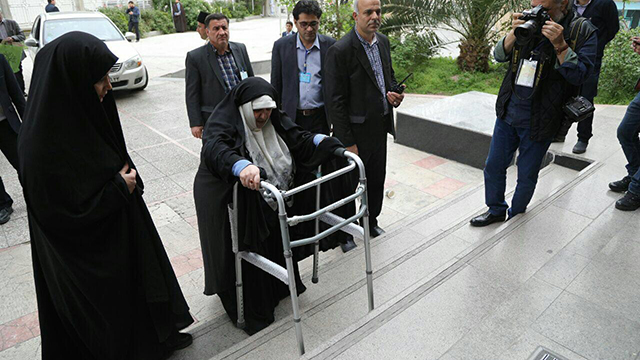 Prominent political activist, Azam Taleghani, 72, makes her way to the Ministry of the Interior to register, for the third time, for Iran’s presidential election, this time for May 2017.

Azam Taleghani: Constitution Does Not Bar Women From Running

Despite being repeatedly disqualified in the past, one of Iran’s top political activists, Azam Taleghani, has registered to run in the country’s May 19, 2017 presidential election.

The daughter of a moderate leader of Iran’s 1979 revolution, Ayatollah Mahmoud Taleghani (1911-1979), Azam Taleghani told the Center for Human Rights in Iran (CHRI) that she registered to “clear the confusion” over male interpretations of the Constitution that have blocked women from running for the presidency.

“The Guardian Council has never presented its argument for rejecting the qualifications of women candidates,” she said. “It has never explicitly stated that women have been disqualified for being women.”

“The council’s position has not been completely negative,” she added. “It has the capacity to accept women’s participation by presenting a different and correct interpretation of the Constitution.”

All candidates must be approved by the 12-member, unelected and predominantly conservative Guardian Council before being allowed to run in Iranian elections.

The 72-year-old secretary general of the Islamic Revolution Women’s Society was elected to the Islamic Republic’s first parliament in 1980.

However, Taleghani’s previous attempts to run for president were rejected by the Guardian Council; first in 1997 and then in 2009.

Nevertheless, despite being ill and confined to a walker, Taleghani is still trying to pave the way for the country’s first female president.

According to the Constitution’s Article 115, “The president must be elected from among religious and political personalities possessing the following qualifications: Iranian origin; Iranian nationality; administrative capacity and resourcefulness; a good past record; trustworthiness and piety; and convinced belief in the fundamental principles of the Islamic Republic of Iran and the official madhhab (religion) of the country.”

Nowhere in the constitution does it state that women can’t run, Taleghani told CHRI.

“Article 115 has listed several qualifications for the president, one of them is being a political personality,” she said. “But that does not mean men only.”

“The deliberations in drafting the Constitution show that banning women was not the intention when the drafters included ‘political personality’ as a condition for the presidency,” she added.

By the end of the registration deadline on April 17, a total of 1636 people had registered to run in Iran’s May 2017 presidential election, including 137 women.

The Guardian Council has never approved a female candidate for the presidency, and has never explained why. However, officials have alluded to the word “personalities” in the Constitution.

“Based on interpretations of the law so far, women are not considered ‘political personalities,’” said Interior Minister Abdolreza Rahmani Fazli on April 11.

In April 2013, Guardian Council Spokesman Abbasali Kadkhodaei said the body had not made an official interpretation of Article 115 in regards to women candidates.

“The truth is that the drafters of the Constitution did have their differences over the issue of only men being candidates or if women could become candidates, too,” he said. “Because of those differences, they decided to use the term ‘personalities,’ which in the future could be interpreted both ways.”

“But there are many who, for religious reasons, continue to believe that the position of president cannot be held by anyone other than a man,” he added.

On December 31, 2016, in response to questions on the upcoming elections, Kadkhodaei said the council “has not yet reached a consensus on who qualifies as religious and political personalities in terms of administrative capacity and resourcefulness” to become president.

Then, on January 12, 2017, the spokesman said a public call had been issued to gather opinions on Article 115, and pledged that an official interpretation of it would be announced before voting on May 19 to end the controversy.

To date, the council has not issued its interpretation.