Iranian State Officials Use Derogatory Language against People with Disabilities 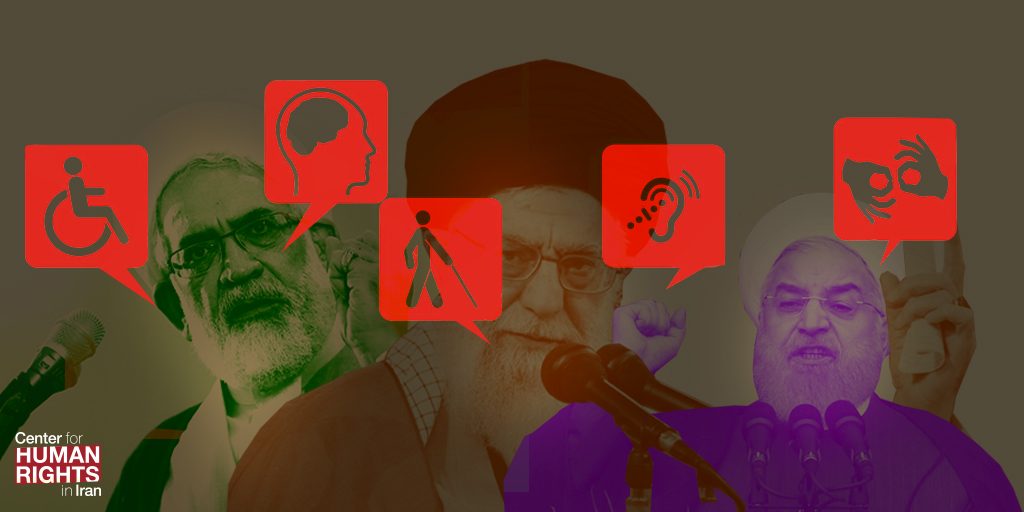 Stigmatization of Disability Perpetuated by Widespread Use of Insulting Language

Despite years of effort by disability rights activists and NGOs to change societal biases about disabilities and protect the dignity of this community, governmental authorities in Iran continue to use references to disability as a means of insult.

In the latest example, Attorney General Mohammad Ja’far Montazeri described the ineffectiveness of INSTEX, the EU’s proposed special-purpose vehicle to facilitate non-dollar trade with Iran, as “the disabled child of the nuclear deal which the West wants to impose on Iran,” and which Iran “should not parent.”

Ja’far Montazeri’s statements came only two weeks after this statement by Iran’s President Hassan Rouhani: “The White House today suffers from mental disability and does not know what they’re doing.”

Language that relies on gender, race or ethnicity in order to convey insults is deemed racist, misogynistic and sexist. Yet references to disabilities as insults—such as “you must have a mental disability” or “you ignore the facts as if you were blind”—are commonly accepted, despite the discriminatory attitude (known as ableism) that they reflect.

Ableism in everyday official language in Iran is widespread. In a public address in September 2017, Supreme Leader Ali Khamenei used the derogatory phrase “mentally retarded” in order to insult the president of the United States. In that case, in addition to using mental disability as a marker of inappropriate behavior, the outdated term “retarded” was used despite the fact that it has long been rejected and replaced with “mental disability.” Specifically, Khamenei said: “[Trump’s words] reveal that he is angry, he is helpless, mentally retarded and having problems. He is empty-headed.”

The prevalence of derogatory, ableist language by Islamic Republic authorities reflects the fact that not only has the government failed to take effective measures to raise public awareness about disability rights, but also even those responsible for policy-making and protecting the rights of people with disabilities hold discriminatory views on people with disabilities.

Respect for the inherent dignity of people with disabilities and their differences, and the acceptance of disability as part of human diversity are among the fundamental principles of the United Nations’ Convention on the Rights of Persons with Disabilities (CRPD).

State Parties to the convention, which include Iran, are expected to apply these principles in their policy-making and disability rights agenda. In addition, according to Article 8 of the convention, States are obliged to raise public awareness about the rights and capabilities of people with disabilities by organizing campaigns, providing active and equal representation of people with disabilities in the media, planning relevant courses in the educational system, and holding special adult education workshops to combat stereotypes, prejudices and harmful practices with regards to disabilities.

Reviewing the Islamic Republic’s implementation of the Convention, the Committee on the Rights of Persons with Disabilities expressed concerns that Iran’s relevant legislation “contains derogatory language such as the terms ‘mentally ill’, ‘insane’ and/or ‘retarded’” and recommended that the government “bring its legislation… into line with the Convention” and “repeal derogatory terminology against persons with disabilities, including in the New Criminal Code.”

“These statements are offensive and upsetting,” a Tehran-based disability rights activist told CHRI. “If they were expressed on social media, we could have reported them as violations against protected groups and their accounts might have been suspended.”

“But the judicial system in our country does not deal with such insults,” he continued. “The irony here is that it is precisely the Attorney General who is responsible for handling such cases that disrespect public interest. They would be pursued through him, but he himself made these statements.”

This activist, who himself has a physical disability added, “I do not understand why the authorities need to use such examples. When I hear these statements, I can’t hope to be seen as an equal to others in my country. I find it hard to imagine a day when attitudes towards people like me will change because people are hearing this language every day in the media and this is shaping their views.”

In order to change such language and attitudes, he added: “Education is the only way to move forward.”

“I wish more attention was paid to candidates’ respect for the rights of various minority groups when electing officials. The most feasible way for the authorities to change is perhaps to appoint advisers from disability communities to consult with them about their rights and appropriate language. The media and the education system also have a responsibility to educate the public.”

A number of people, including well-known disability rights activists, responded to Montazeri’s statements on social media. The official Twitter account of the Iranian Campaign for the Implementation of the Law to Protect the Rights of the Disabled called these statements an “outright humiliation and insult to people with disabilities and their parents, and the promotion of negligence and negative attitudes toward disability by the country’s Attorney General.”

Following a series of new US sanctions against the Islamic Republic which targeted the supreme leader and institutions under his supervision, President Rouhani said in a speech addressed to directors at the Ministry of Health and Medical Education in June 2019, “[American officials] are in great confusion and are incapable. They are mentally impaired, and the White House today has a mental disability and does not know what it is doing.”

In response, disability rights activist Negin Hosseini wrote on her Telegram channel, “No one has the right to use this term in order to insult and humiliate someone. The president of the Islamic Republic of Iran has used his official platform and, in an attempt to humiliate and mock the White House, has said [White House officials] are suffering from mental illness. More than an insult to American politicians, this simile is an insult to the Iranian people and a significant population of people with mental disabilities, their families and disability rights advocates.”

Roya Babaei, journalist and editor-in-chief of the Peik-e Tavana monthly, wrote on Twitter on June 26, “Rouhani used his official platform to say that White House officials suffer from mental disabilities, in an attempt to insult and mock. Yet no one has the right to use this term in order to humiliate….”

Vahid Hajefroosh, director of the disability awareness-raising campaign Cactus, wrote on organization’s Telegram Channel: “In a world where promoting inclusivity brings credibility, pride and value to governments and countries, the elected president of Iran moves in the opposite direction with his use of inappropriate language. While using the US sanctions against the Supreme Leader to show and highlight his alignment with regime values, he chooses the phrase ‘mental disability’ to ridicule the enemy.”

The Campaign for the Implementation of the Law to Protect the Rights of the Disabled posted a video of Rouhani’s speech on Twitter and added: “[This is a] humiliation and insults people with mental disabilities by attributing this disability to the White House, and promotes such use of the word for the purpose of mocking.”

In addition to top-level officials, such stereotypical and discriminatory views of people with disabilities are common among those who are officially responsible for protecting and promoting disability rights.

For example, referring to the government’s new plan to reduce births of children with disabilities by requiring genetic testing for registering marriages, head of the State Welfare Organization (SWO) Vahid Ghobadi-Dana announced on March 2, 2019 that “prevention of disabilities is the top priority of SWO” and added: “The engine of disability production in the country must be stopped.”

Ghobadi-Dana made this reference to stopping the “disability engine” on several occasions, using a metaphor that compares the birth of people with disabilities to the production of unwanted goods. Such language perpetuates the notion that people with disabilities are less worthy than others and should not exist, and that the government should do whatever it can to reduce their numbers.

In a stunningly derogatory comment, Secretary General of Tehran City Council’s committee for people with disabilities Majid Mazji claimed in February 2018 that disabilities are linked to “atonement for sins.”  He stated, “We do not complain about our situation to the Divine throne, and see these afflictions as a blessing in disguise, as God’s wisdom. Because this is God’s atonement for our sins. Yet this does not undermine the duties of the government and the public.” These remarks, linking a person’s disability to their behavior or past “sins,” promote an ignorant and profoundly destructive view of disability.

Similarly, Health Minister Hassan Ghazizadeh Hashemi spoke openly about what he believed was the lesser value of the lives of people with disabilities in August 2018. In a televised interview that prompted widespread criticism, he said: “The medication for MSA (the neurodegenerative disorder multiple system atrophy) costs a billion tomans… do people allow us to spend one billion tomans per year to increase the life expectancy [of people with MSA] by two or three years? If they do allow this, then it means that we have to compromise something else.”

He went on to say that MSA did not deserve a great amount of administrative effort and financial investment: “We have a lot of diseases like this. Extremely high costs just for a low lifespan. Now, do I provide milk powder [for children] or medication for someone who may live only two years longer as a result of it? Am I allowed to use the money that belongs to all people for this? ”

A human rights approach to disability, which forms the basis of the United Nations Convention on the Rights of Persons with Disabilities (CRPD), understands disability as a social construct, which reflects the interaction between the person’s physical or mental impairment and the societal context in which they are living.  In other words, an individual’s experience as a person with disabilities is as much dependent upon the social environment as it is upon the actual impairment. The Islamic Republic has yet to understand—or implement—this approach to disability.