Prison, Flogging for Protesters Who Gathered to Commemorate Victims of Plane Crash “The trial did not last even a minute,” Legal Counsel Denied

Civil rights activist Shora Fekri was taken to prison in Amol, Mazandaran Province, on May 18, 2020, to begin serving a five-month prison sentence for protesting Iran’s downing of a Ukrainian passenger plane, the Center for Human Rights in Iran (CHRI) has learned.

After three days of denials, Iran’s Islamic Revolutionary Guard Corps (IRGC) admitted to “accidentally” shooting down the plane on January 8, 2020, killing all 176 aboard. Thousands of Iranians, mainly university students, held rallies in Tehran and other cities condemning the downing and the official denials. Court ruling against a group of Amol defendants

So far more than 16 protesters have been handed prison and flogging sentences in Amol alone. They had been arrested by the IRGC’s Intelligence Organization on January 12, 2020, in the city’s main square where they had gathered to commemorate the victims.

They included Shora Fekri, Mohsen Rezaei, Meysam Khalili, Mehdi Raei and Salman Farrokhi, who on April 24 were sentenced to five months each in prison for “propaganda against the state” by Branch 1 of the Revolutionary Court in Amol presided by Judge Morteza Mahdavi.

Eleven others — Amin Forouhi, Ali Shokri, Azadeh Javani, Aydin Javani, Ayda Javani, Alireza Mohammadnejad, Fereshteh Mahmoudi, Hossein Mostafania, Meysam Khodabandehlou, Hamid Mohammadi Irani and Mohammad Reza Shojaei — were sentenced to eight months each in prison for “propaganda against the state” by Branch 1 of the Revolutionary Court and an additional five months in prison and 20 lashes each ordered by the Criminal Court in Amol for “disturbing order.” The sentence issued by the Criminal Court has been suspended for one year.

“The trial did not last even a minute,” an informed source told CHRI on May 20 on condition of anonymity. “The judge asked if the defendants were at the gathering and whether they had chanted any slogans. That’s all. Then he issued a verdict… Neither the trial nor the verdicts were in accordance with the law.”

All 16 individuals were denied legal counsel during their trials.

Except for Shora Fekri, all the defendants are free on bail awaiting a decision on their appeal.

A resident who was at the January 12th gathering in Amol told CHRI: “We were supposed to meet at Qaem Square at six in the afternoon to light candles to commemorate the victims of the Ukrainian plane crash. When people started to gather, the police beat them and did not let them hang around.” 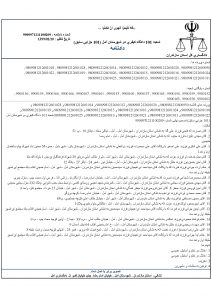 Court ruling against another group of Amol defendants

“The gathering was completely peaceful. The people were only chanting slogans and marching on the sidewalk without going onto the street. There were between 1,500 and 2,000 protesters and about 70 percent of them were women. They were assaulted by the police and security forces and a number of them were arrested by the IRGC and others by the security police.”

“Those who were arrested did not show any resistance because they had not broken the law. But they were beaten with batons, kicked and punched. Two detainees were taken away despite bleeding from the head.”

“At the IRGC Intelligence Organization’s detention center they were treated very badly. They were ordered to take off all their clothes supposedly for a body search, hand-cuffed to chairs and severely beaten to the point that they still had marks on their bodies when they were freed.”

“Rahim Rostami, the case interrogator at the IRGC’s detention center, was extremely abusive towards the detainees.”

The eyewitness, who asked to remain anonymous, added: “What happened in Amol on January 12 was not a security issue at all, but a very simple gathering for people to express their grief and sympathy toward a sad incident. But the authorities would not let them.”